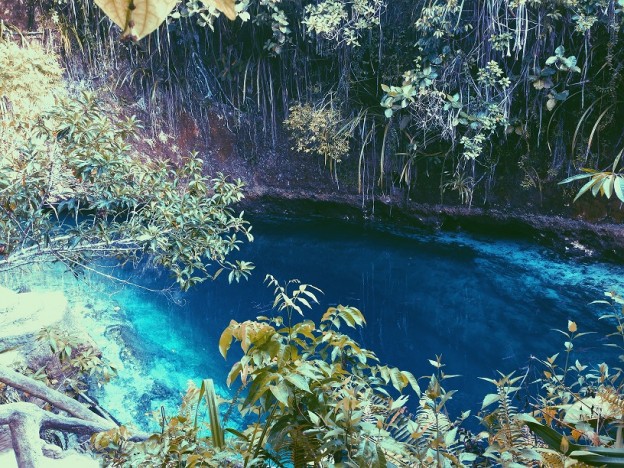 The Hinatuan Enchanted River – a deep spring river on the island of Mindanao (Philippines).

Introduction
The potential of evidence-based research in improving the quality of life in the Philippines expands when linked to effective policymaking. Rooted on the idea that policies determine the state of a country, research then plays a critical role as the compass that steers nation-building initiatives on the right path. As the interest in policy-oriented research continuously grows, the need to disseminate research and increase its accessibility comes next in the agenda. This is the mandate of the Socioeconomic Research Portal for the Philippines (SERP-P)—a knowledge networking initiative of the Philippine Institute for Development Studies (PIDS).

In 2000, the SERP-P was established to become a leading electronic repository of policy research in the country. What started as a partnership among 19 institutions developed into a network of 53 member-institutions—comprised of government agencies, academic and research institutions, and local and international development organisations. At present, the SERP-P is home to more than 5,500 materials contributed by almost 3,000 authors. At the core of the SERP-P lies its objective to make these materials and researches, which are required for the formulation of local and national development plans and policies, accessible to everyone.

To advance its cause, the SERP-P joined the Global Open Knowledge Hub (GOKH) — an initiative of the Institute of Development Studies (IDS) — in 2014. The GOKH project aims to put forward the open knowledge agenda and increase the accessibility and availability of research information. Through the OKhub — the online platform of the GOKH project — materials on the SERP-P reached Northern America, Eastern Africa, Northern Europe, and other parts of the globe. The wide range of materials already available on the OKhub, meanwhile, gives an international perspective to Filipino researchers who conduct local research. The SERP-P Network has also benefitted as the partners learn more about open knowledge. Undeniably, the byproduct of this collaboration (i.e., SERP-P and GOKH) has not only carried a common goal to promote open access among the SERP-P Network but has also reinforced the role of evidence-based research in crafting effective policies and regulations.

This story of change builds on the experience of the Mindanao Development Authority (MinDA)[1] where policy-oriented research and the open access agenda, through the SERP-P and GOKH, meet to serve a common purpose. 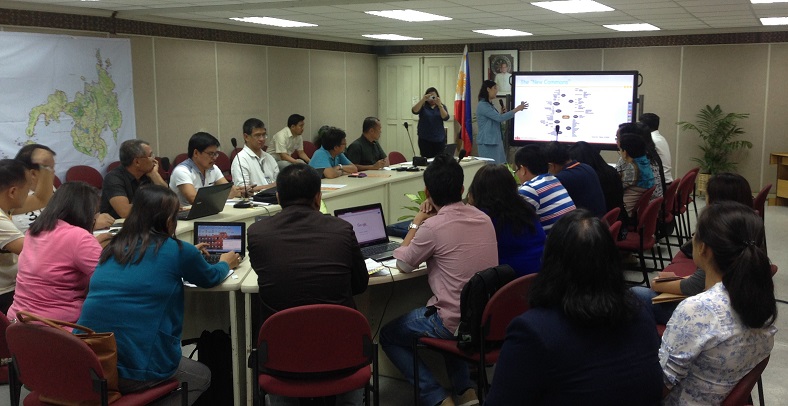 Shifting to a new Mindanao
Recent development initiatives in Mindanao[2] demonstrate the potentials of linking research and policies together through open knowledge networking. As a member of the SERP-P Network, MinDA[3] not only has pushed forward relevant initiatives gathered from research materials on the SERP-P and OKhub but has also localised national-level studies and assessments to better fit in their context.

For instance, because of the partnership between the SERP-P and MinDA, a memorandum of agreement was signed between PIDS and MinDA to conduct an inaugural policy forum, which centered on advancing Mindanao towards sustainable economic development and balanced ecosystems. This forum brought together more than 100 participants from the government, academe, business, and civil society sectors to underscore the potentials of policy research in pursuing development goals in Mindanao. The comments and ideas solicited from the policy forum were monumental in the follow-up activities held with some ecosystems stakeholders in the region. The forum was also significant in deepening the embedded cultural ties within the tourism sector, and was influential in changing the mindset of some academic institutions and local government units in terms of green and gold tourism and payment for ecosystem services. PIDS and MinDA plan to hold this policy forum annually.

By using the open knowledge framework of the GOKH project, MinDA staff and partners, particularly state universities and colleges in the region, have had a better understanding of the open access initiative. A number of Mindanawon[4] researchers, who used to keep their research for their university’s consumption, have now considered publishing their works with minimal restrictions. These universities have also included digitizing publications in their action plans. Currently, the SERP-P team at PIDS is also providing assistance to MinDA in creating their own portal called the Mindanao Knowledge Center (MKC). The GOKH project, meanwhile, provides necessary inputs and materials in advancing the open knowledge agenda among the MKC Network.

In terms of information usage, there were instances when MinDA used materials downloaded from the SERP-P website to review and assess research gaps in Mindanao.[5] As an example, a review of the SERP-P database showed a huge gap in terms of research on the infrastructure support and efficiency of the rice sector in Mindanao that led local researchers to conduct their own study, employing the methodologies they explored from the related studies found on the SERP-P website. The result of this particular study was later presented in various fora, where different line agencies, academic institutions, and irrigators’ and people’s organisations validated initial results. Some local chief executives, who are at the forefront of development in the towns and cities of Mindanao, also participated in the study. As a result, various efforts — including implementation of farm-to-market roads, pavement of national roads, and rehabilitation of irrigation systems—were undertaken.

More importantly, evidenced-based research provides an objective evaluation and assessment of existing and proposed laws—whether or not these laws provide the needed change or intervention. The SERP-P has a long list of assessment and impact evaluation studies that the MinDA staff used in crafting their own regulations. SERP-P materials, along with the resources from the OKhub, have thus become one of the major sources of discussions in meetings within and outside MinDA.

Through the studies that have been done, MinDA is able to strategically employ what works and eliminate what does not, particularly in assessing their place in the Southeast Asian regional integration, in analysing the brain-drain situation in higher education institutions, and in understanding the social aspect of the conditional cash transfer program of the government. For instance, PIDS studies that tackle the Cabotage Law provided Mindanawons a clear picture of its effect on the shipping industry in the region. Both the public and private sectors welcomed this initiative, as this national policy becomes favorable to Mindanao in general. 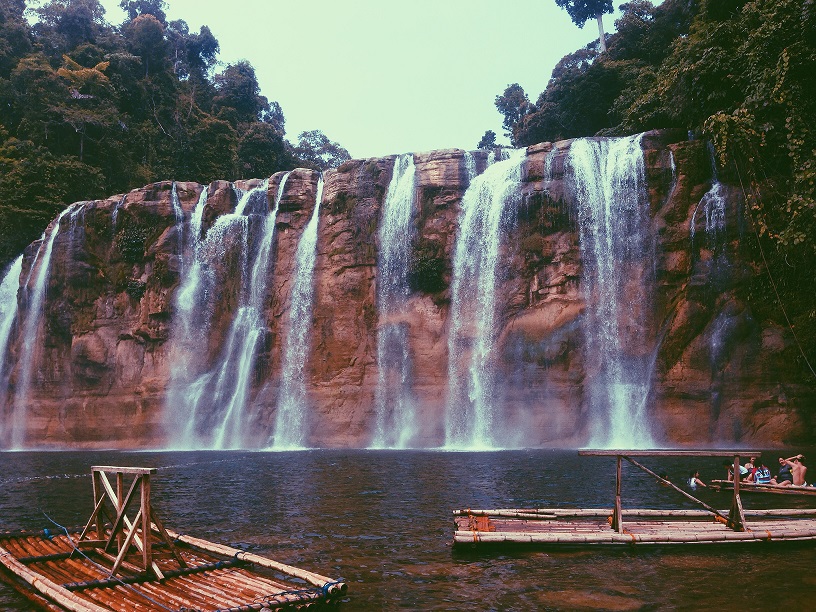 The Tinuy-an Falls – a multi-tiered waterfall in Bislig, Surigao del Sur in the southern island of Mindanao (Philippines).

Prospects
The rise of open access in recent years has made the link between research and policy clearer and tighter. Because of GOKH’s commitment to promote open knowledge advocacies and the SERP-P’s support to knowledge networking, the understanding and acceptance of open access mechanisms, which seemed beyond reach at the beginning, have started to form a solid foundation in the way MinDA and its partners see research networking.

Lastly, making Mindanao-related materials accessible through the SERP-P and OKhub helps change the general perception that Mindanao is a war-torn region. MinDA believes that if they continue to do local research, important issues will not only be raised to the national level but can also be the spark plug to alter the course of Mindanao and become a major contributor to the national economy. Likewise, with the help of a broader set of research resources on the OKhub, it is an opportune time for MinDA to conduct researches that directly impact the lives of the Mindanawons.

Footnotes:
[1] MinDA is the lead agency in coordinating and integrating development efforts in Mindanao. It has been a member of the SERP-P Network since 2012.
[2] Mindanao is the second largest and the southernmost major island in the Philippines.
[3] The MinDA staff interviewed for this story are Ms. Sheila Almasa, Mr. Marlo Sullano, and Ms. Missiles Somoza. They are technical staff, development management officer, and information system researcher, respectively, at MinDA.
[4] Mindanawon refers to the citizens and inhabitants of Mindanao.
[5] Based on the SERP-P Case Studies of Contributions to Users by Jennifer P.T. Liguton and Katherine Mitzi Co.